At the MLA Convention (online) on Jan. 9, 2021, Zong-qi Cai received the 2020 “Distinguished Editor Award,” the highest honor given by the Council of Editors of Learned Journals. This is the first time the editor of a journal in Asian literature and culture has won this prestigious award. Below is the award citation:

Zong-qi Cai was the consensus choice for the 2020 Distinguished Editor Award. He has founded (or co-founded) two Duke University Press journals: Journal of Chinese Literature and Culture (established in 2014) and Prism: Theory and Modern Chinese Literature (established in 2018), serving as editor-in-chief of both. The global impact of Cai’s editorial work is signaled by his efforts to bridge the work of North American and Chinese sinologists. For example, he has consistently promoted and published English translations of key essays by Chinese scholars. Moreover, Cai is committed to publishing interdisciplinary work by early career and senior scholars that brings new theoretical perspectives to Chinese literature and culture. Additionally, in 2014 Cai resurrected a Chinese-language journal, the Lingnan Journal of Chinese Studies, which had been shuttered in 1952. In sum, Cai’s simultaneous work on three journals shows a deep commitment to editing. 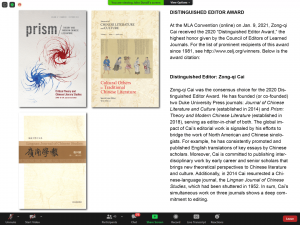